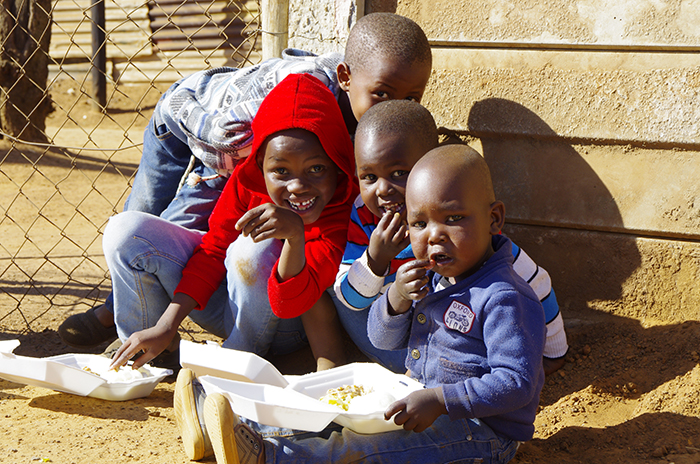 In 1994, Humanity scored a major victory with the official end of Apartheid in South Africa, and while much progress has been made since this date, over 50 percent of the population still lives in poverty, with a large portion of these living in extreme poverty.

In the extreme-poverty sectors of South Africa, the so called “squatter camps,” little to no progress has been made. Due to their economic situations, time has essentially stood still since that momentous occasion, and they are still living in the same conditions as they did during Apartheid.

A squatter camp, (and there are many in South Africa) is essentially a government-sanctioned location, where the poorest of society build shacks in order to somehow eke out a living. As they are located at the edges of society, they lack basic services such as running water, electricity, food, and proper sanitation — not to mention medical support or any form of social services.

Children growing up in squatter camps frequently eat only one meal a day, do not have basic hygiene facilities, and do not have the opportunity to go to preschool. If and when they do make it to school, they are so far behind that they almost never catch up.

These children lack nothing in compassion, friendliness, or intelligence. It is simply a matter of not having basic services to allow them to get ahead in life. It is, unjustly and unfairly, a matter of being born in the wrong place at the wrong time.

Not having access to basics such as adequate food, clothing, shelter, and education, is a violation of basic human rights. This is just wrong, and is not something that should be tolerated in the 21st century. Charity United has begun a project to make this right, by taking an active hand in bringing basic human rights to the children in squatter camps.

We invite you to join us in our mission of turning the squatter camps into the right place at the right time, where each child is given the opportunity for food, shelter, and education, so that they may have the chance of making it out of the squatter camps.

With your help, Charity United is providing food, clothing, shelter, hygiene supplies, education, and basic humanitarian aid to children and families in the poorest areas of South Africa, beginning with a squatter camp within the township of Etwatwa.

In addition, we are building a community center where children will be able to come and have a meal, get help with their school and homework, and where they and their families can participate in a community garden project where they will learn to grow their own food.

We invite you to join us in providing a real change and a real future for children — children who will have no future if we don’t take action.