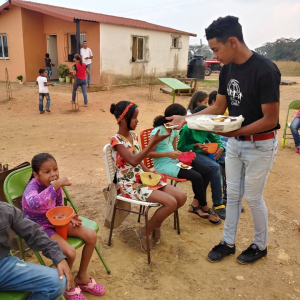 A volunteer passes out food to children in Venezuela

Imagine a place where grocery stores often are empty, where you might walk 20 kilometers in scorching heat to reach a gas station for fuel for your car, where water or electricity can be off for a week at a time, and where parents have begun to abandon young children on the streets for lack of money to feed them.

Should a 10-year-old live on the streets with a gunshot wound?

Should a young boy’s feet bleed for lack of shoes?

Should a toddler have to eat out of a garbage can?

While it may not be all over the news, this has begun to become the reality of the country of Venezuela. The biggest casualties are the children.

This is a hidden crisis.

Children in Venezuela have been going hungry, or even starving. They have been being abandoned by their parents for lack of money to feed them, living without proper clothing or protective footwear, going without vital medical or dental treatments, missing their educations, and coming under the control of human traffickers and criminal gangs.

Charity United volunteers are on the ground in Venezuela, bringing help to these children.  In addition to finding lost and starving children on the streets to bring them aid, we have now created new community centers. 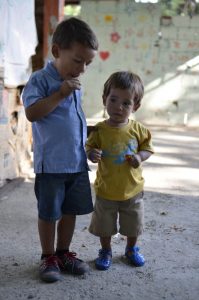 The children can come to a community center to receive food, soup, education, and even a safe place to play.  Firefighters volunteer their time to act as security guards.  Nutritious soup is given, and free classes are held for children.

Some of the aid we have been providing to the children of Venezuela, both inside and outside our community centers, includes the following:

Below you will see photos taken by our volunteers on the ground. With a few exceptions, most photos of children are taken after the children have begun to receive help, and are of a better state of mind than when we first met them. This is because, when a child is already hungry and traumatized, having his photo taken can be a very unpleasant experience. We wait till kids are feeling better before we bring out the camera.

Every donation received makes a tremendous difference in how many children we are able to help, and how much help we can give.

Donations are US tax-deductible to the full extent allowed by law.

DONATE TO THIS CAMPAIGN